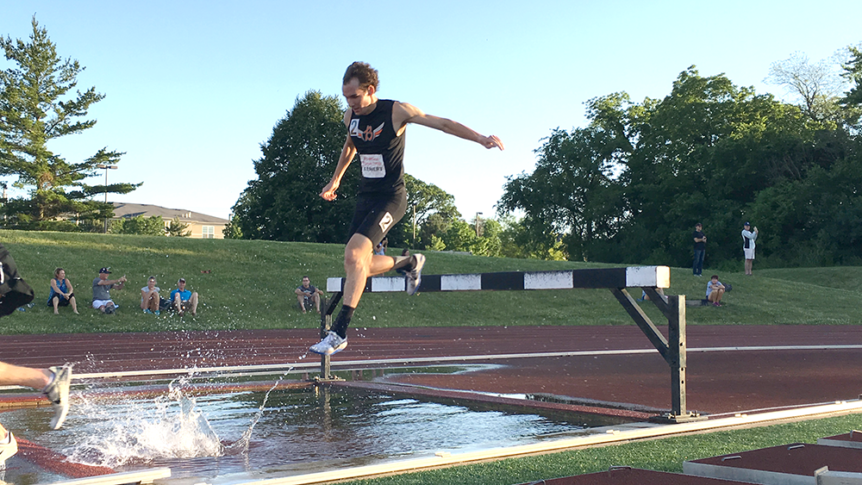 LISLE, IL—An Ohio brother-sister duo winning the boys’ and girls’ 2000 meter steeplechase races was among the highlights at the 2017 Midwest Distance Classic on June 10 at Benedictine University.

With winds gusting to 30 mph and the temperature at 92-degrees at the meet’s 7:00pm start time, Ben Ewert, a recent graduate of Beaver Creek High School, defended his 2016 steeplechase title with a meet record and personal best time of 5:58.89—the fastest time in the nation this season. Ewert, who also ran a 4:13 mile and 9:17 2-mile this season, is part of a great Louisville University recruiting class this year.

Taylor Ewert won the girls’ steeplechase in 7:24.40—just three-tenths of a second off her personal best set last summer en’ route to finishing third at the National Junior Olympic Championships. The versatile freshman also ran a 5:11.36 mile this year and race-walked a 7:06 mile indoors at the 2017 Millrose Games. In cross country last fall, Ewert helped her team to a third place finish in the Ohio State Championships with a 13th place finish in a lifetime 5K best of 18:11.4.

The steeplechase pays homage to the earliest origins of modern distance running, where, in the late 1700’s the first organized foot races were between church steeples—the highest and most visible landmarks on the European countryside—over hill and dale, fences, hedges, and streams, plowed fields, and anything else that lay in between them. These were called “steeplechases” and they soon became out-and-back races so spectators could see both the start and finish. The loop paths they followed were called “tracks”, which is where that term comes from. At the turn of the 20th century, races over natural terrain were more accurately re-named “cross country” running.

At the collegiate and international level, the steeplechase distance is 3000 meters. However, 2000 meters is the steeplechase distance contested at the high school level and USA Junior Championships. The grueling race is 5-laps around the track where 5 hurdle-barriers are spaced 80m apart. The hurdles are 12-feet wide and weigh 220 lbs. One of the barriers is placed in front of a water-jump at one end of the track, where competitors must span a pit filled with water that is 12-feet long and 3-feet deep just below the hurdle. Start to finish, there are 18 hurdle barriers and 5 water jumps to negotiate. The girls’ hurdle heights are 30-inches high and the boys’ are 36-inches—the same heights used for women’s & men’s collegiate and international steeplechase competition.

In the girls’ 800 meters, New Trier junior Savannah Noethlich made up for a disappointing 11th place finish in the state meet 800 by winning the race with a 3-second lifetime best time of 2:13.74. Evanston HS junior Enyaeva Michelin, 7th in the Illinois state 800m final, ran a 3-second PR of 5:03.47 to win the 1600 meters. Her grandfather, Don Michelin, has been an Evanston track/cross country coach for 34-years, and her father Donald, coaches the distance runners on the boys track team.

The boys’ 800 meters saw an upset when Rockford HS junior Cole Johnson rocketed away from Chris Conrad (the Illinois state champion in 1:49.91) over the last 200 meters. Johnson, the Michigan state mile champion and 800m runner-up this year, won with a 2-second lifetime best time, 1:50.72 to 1:50.95.

The boys’ 1600 meter win by talented Whitney Young junior, Clayton Mendez, was no upset, as the Illinois 3200m bronze medalist (9:08.75) stepped down to the mile. His winning time however was a surprise—a
six second personal best of 4:11.26.

The boys’ 3200 meters featured the largest and deepest field in the meet with 2-heats of 19 runners. After Chelsea, Michigan junior Tom Oates won the “slow” heat in 9:26.64, Kearney, Missouri senior Clayton Adams won the second heat in 8:58.47. Helped by brilliant pace-setting through 6-laps by recent Eastern Illinois grad Riley McInerney, Adams (the fastest miler in Missouri HS history at 4:04.53) burned holes in the track with a 58.3 final lap to win in 8:58.47—a 9-second lifetime best.