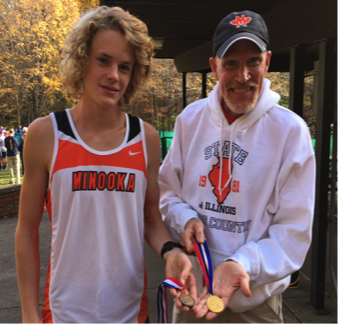 Soren Knudsen is fighting an upper respiratory illness, and will not compete in Saturday’s meet.

LISLE, IL—Last summer, Minooka senior Soren Knudsen was thumbing through the list of national high school records. When he got to the record for the boys’ 2000 meter steeplechase, he paused and did some quick calculations. The record is 5:41.67 set by Bailey Roth of Coronado High School in Colorado in 2014. Four laps in 68 would bring him to the mile in 4:32, he thought, and a final lap under 69 would break the record. But there were more pressing matters to think about then—like the coming 2016 cross country season. So Soren wrote 5:41.67 on a piece of duct tape and posted it in his basement.

The first modern organized foot races were between church steeples—the highest and most visible landmarks on the European countryside—over hill and dale, fences, hedges, and streams, plowed fields, and anything else that lay in between them. These were called “steeplechases” and they became popular in the late 1700’s throughout England and Europe, mostly because of betting. They soon became out-and-back races so spectators could see both the start and finish, and the loop paths they followed were called “tracks”—which is where that term comes from. At the turn of the 20th century, races over natural terrain became known as “cross country” racing.

The steeplechase is a track & field event because it pays homage to the earliest origins of modern distance running. The collegiate and international steeplechase distance is 3000 meters. However, 2000 meters is the steeplechase distance contested at the high school level and USA Junior Championships. That race is 5-laps around the track where 5 hurdle-barriers are spaced 80m apart. The hurdles are 16-feet wide, 36-inches high, and weigh 220 lbs. each. One of the barriers is placed in front of a water-jump at one end of the track, where competitors must span a pit filled with water that is 12-feet long and 3-feet deep just below the hurdle. Start to finish, there are 18 hurdle barriers and 5 water jumps to negotiate.

Last November, Knudsen checked-off one of his senior year goals when he won the 3A state cross country title on the historic Detweiler Park 3-mile course in 14:02—matching his father Jim’s 1981 state title. Jim went on to be an All-American at Kansas State, while Soren will wear the colors of Northern Arizona University next fall—the defending NCAA cross country champions.

Which brings us to this Saturday’s Midwest Distance Classic boys’ 2000m steeplechase. The 12-man field will include Louisville-bound Beaver Creek HS (OH) senior Ben Ewert, the defending champion who ran a nation-leading time of 6:01.59 last year, and Minocqua (WI) junior Kav Fitzpatrick, who won the Kansas Relays steeplechase this year in 6:13.80. 2017 Eastern Illinois grad Riley McInerney—himself an 8:53 3000m steeplechaser and 4:05 miler—is going to try to pace the field to a 4:28 mile. It will be a great race.

The Midwest Distance Classic is a post-season track meet for high school distance runners. Held at the world-class track & field facility at Benedictine University in Lisle, IL, on the second Saturday evening of June, it has a 7:00pm starting time and a $5.00 spectator admission fee.  Since its inception in 2005 as the “Midwest Distance Gala”, this premier post-season competition has attracted 150-200 of the best boys and girls distance runners from throughout the Midwest. The 2016 Distance Classic attracted 186 athletes from 11 states and its 10 races for boys and girls produced 14 of the top marks in the nation in those events.